School's Out Fundraiser: The Aftermath 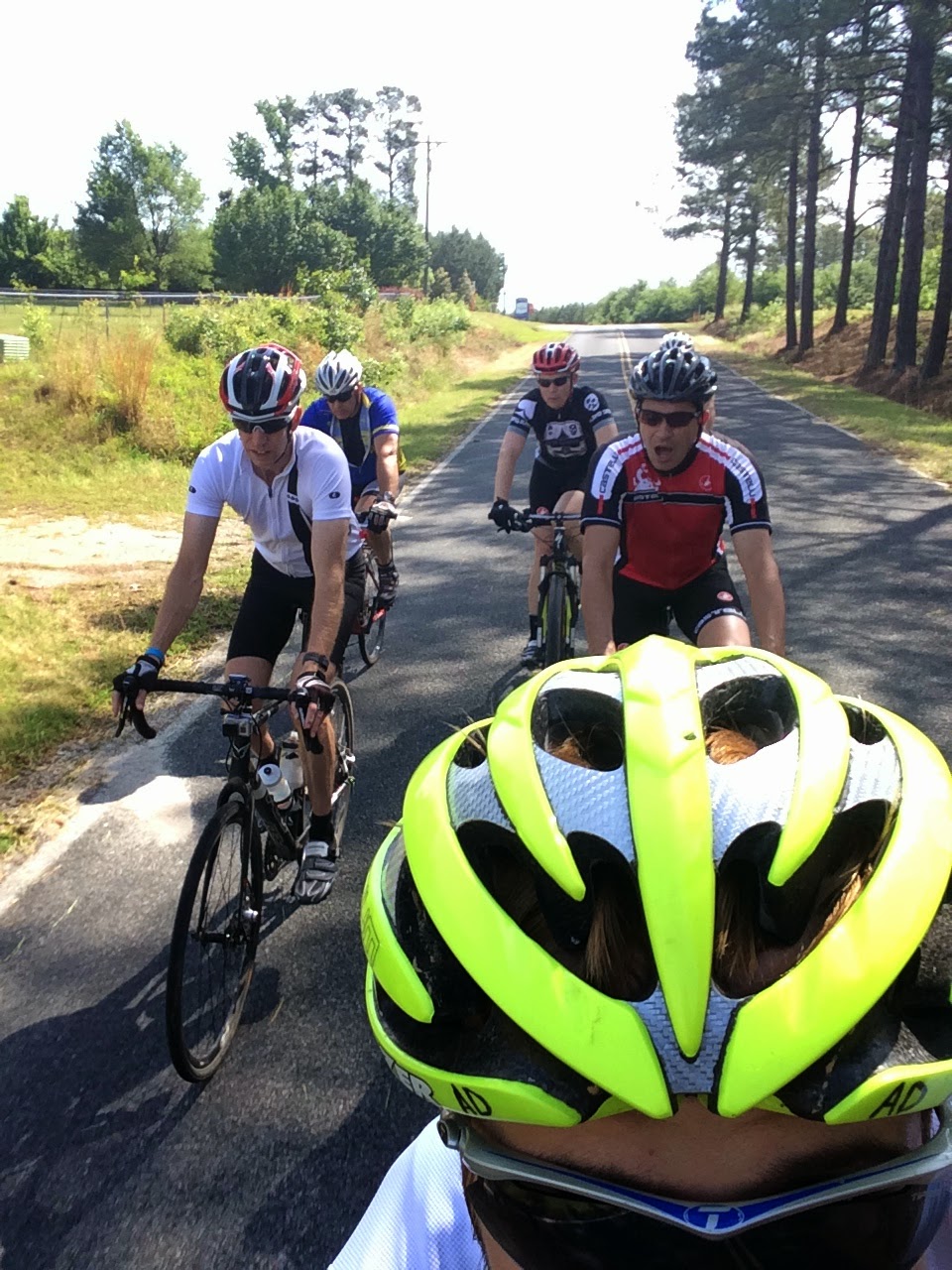 The School's Out Gravel Grind is the third ride I've organized while heading the Gamecock Cycling Club, and the second fundraiser ride. I've always been nervous organizing a pay what you want fundraiser event, rather than charging a registration fee, but it seems to work. There's not a ton of financial risk but after securing a USA Cycling non-competitive event permit, and paying a $1 insurance fee per rider, there is the possibility that the fundraiser will become a losing endeavor but I like to think that the events my friends and I put together are fun enough that the riders feel comfortable contributing to the cause.

Seventeen hearty souls showed up for the 9:00 rollout in Blythewood, ready for a day of sun and dirt. The group all seemed to have the same thing in mind- hangout together and enjoy an awesome morning of bike riding. There wasn't going to be any sword measuring, and little talk of watts.

Unfortunately the morning started off with some difficulties, as Tyler from Charleston found himself with a broken bolt on his seatpost collar. Luckily, the mechanical error gave a hungover Clayton an opportunity to get to the parking lot a few minutes late. After cobbling together a fix, the group rolled out.

The weather cooperated the night before the ride, bringing some moisture (well, thunderstorms and hail) that packed down the dirt and sand. The first section, the downhill washout leaving Cobblestone Park, however, did not benefit from the rain. It wasn't bad but as the first section of dirt, a slick, grassy descent made things interesting. It didn't help that I started to overcook a turn and entered a two-wheeled drift... while leading the group. That could have ended poorly.

While we did have one bottle-ejection on this section, the worst of the damage was yet to be seen. 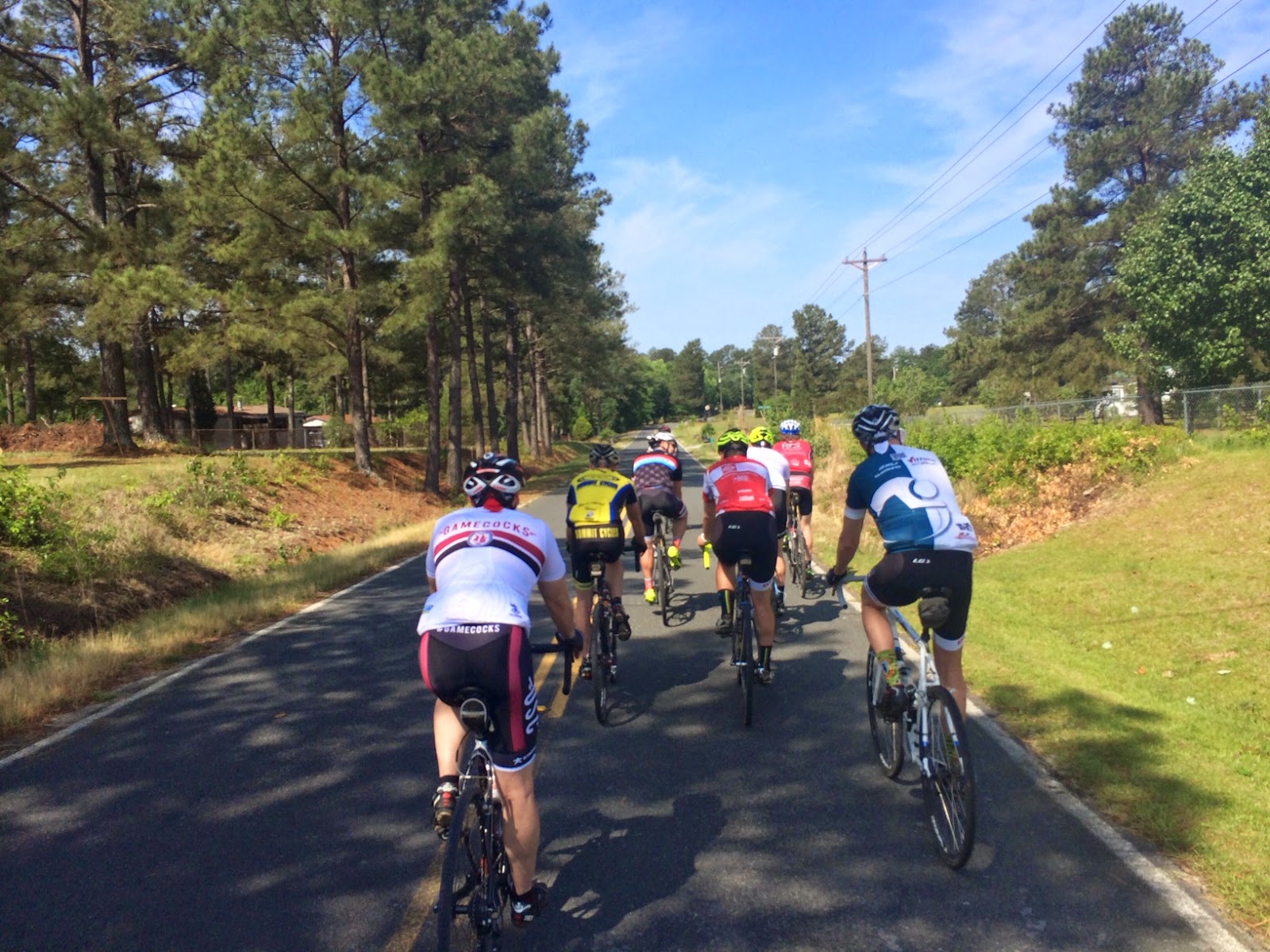 As the dirt sections, and the climbs, began to steadily tick by, we discovered that Tyler's cludgy seatpost repair had failed, and his seatpost was now swinging freely in the frame.

Unfortunately, the two Charlestonians had to turn back to the car. It bummed me out that they traveled that far and didn't get to complete the ride, but I guess these things happen. It also continued my tradition of organizing a ride, and seeing someone who drove from out of town have to turn around early. Next time, I'll bring a collection of spare parts.

The rest of the group carried on, taking in the scenery of Blythewood and enjoying a new (for most of us) part of town. There were abandoned farms, donkeys, baby goats and every type of gravel you could imagine, including a stone that flew off of a rider's tire and left a significant welt in my shin. 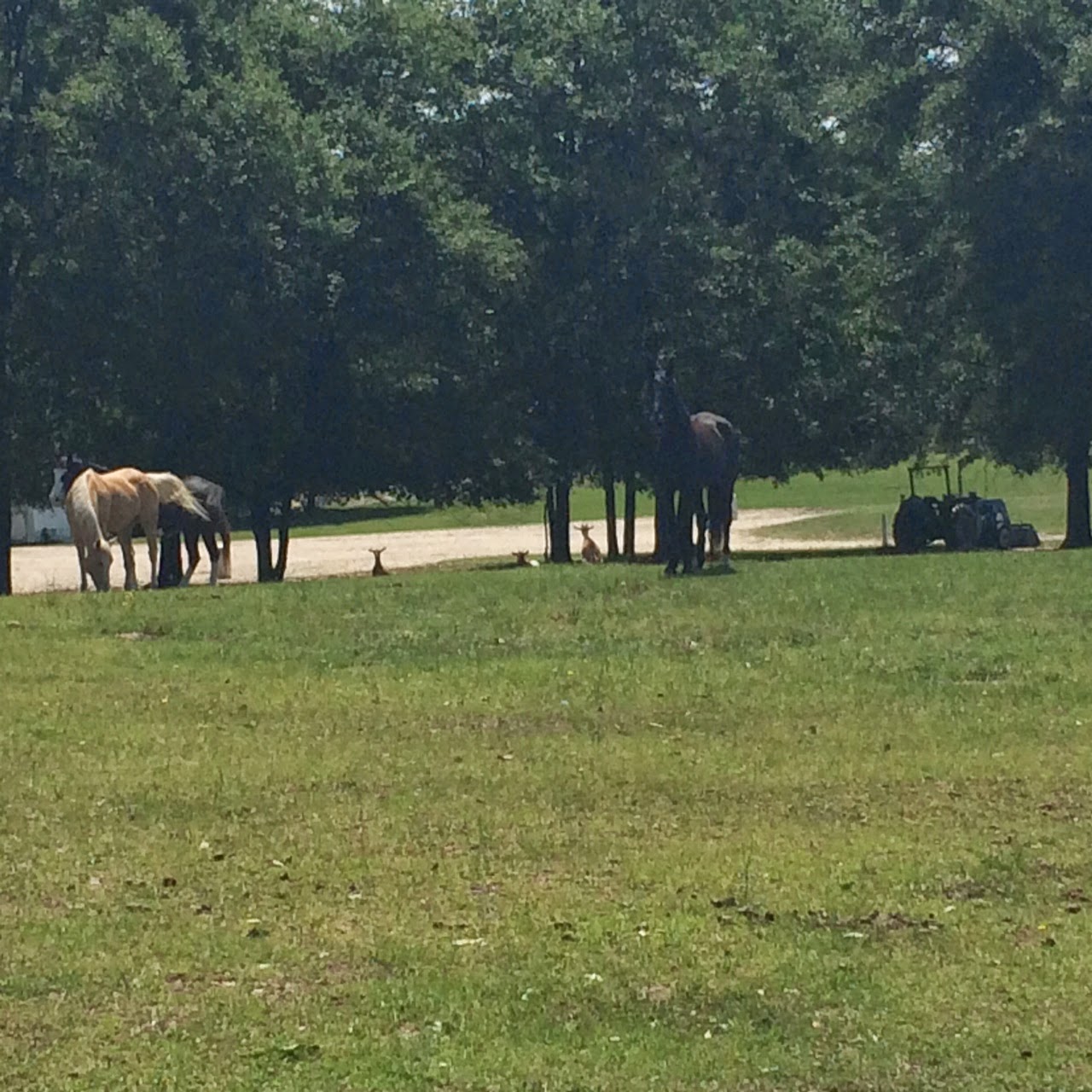 I think that the climbs caught everyone off guard, just as I expected. "I'm tired of this uphill shit" was uttered more than once. It seemed like every road went up, and 35 miles into the ~45 mile event, I was definitely starting to hurt. I think everyone else felt the same, and hopefully that's a good thing.

The second loop, the shorter 15 mile loop, was very well received and will likely be revisited soon. It's definitely one of those "it'll make you fast" routes that you could repeat a few times in one ride.

As for me personally, I could tell I've been off my bike and the bike itself was quite the comedy of errors. My Paul Components chain guide was set in a little too tight, rubbing on my chain when I was in my small gears. My tire was showing some obvious wear, and I was worried that the bead might separate from the casing. Lastly, I caught a nice pothole late in the ride, after the legs had already clocked out, and my saddle slipped nose-up, making the last few miles that much more uncomfortable.

Overall, the ride went very well. I'm really thankful for Henry putting together this loop. As a fundraiser, it was super successful and this is a more than welcome relief, especially this far ahead of the fall semester.

I was told at a group ride on Monday that I put together good rides. More importantly than successfully fundraising for the club, I'm happy that I can do something that people like. I've really enjoyed putting together these few events and I'm hoping that it's something I can continue doing, and maybe do more seriously in the future.

Of course, the next event on the schedule is heads and shoulders above anything I've organized so far, and I cant wait for it to happen.

If you couldn't make the ride but you're still interested in supporting the Gamecock Cycling Club, you can donate here:
http://www.gofundme.com/cyclecarolina
Posted by Justin at 10:00 AM