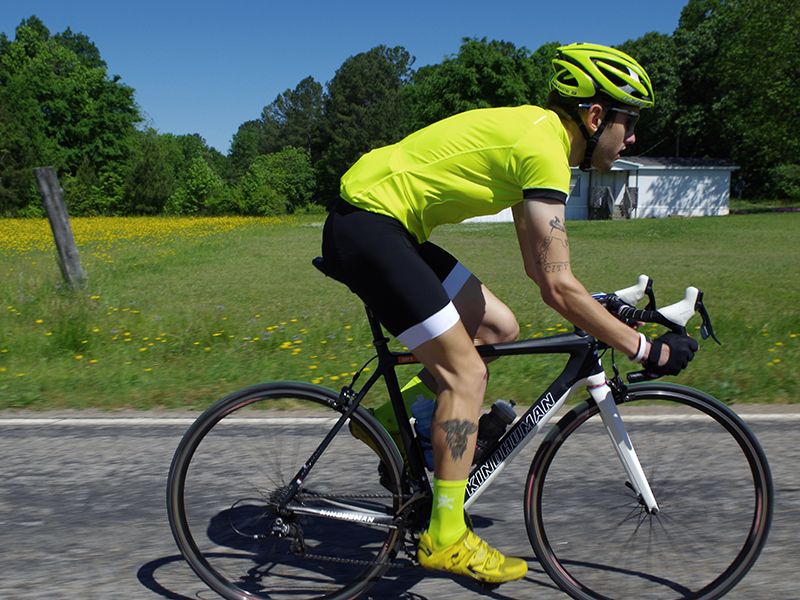 I’ll preface this by saying- I’ve had a carbon cyclo-cross bike, I’ve had an aluminum cyclo-cross bike with carbon seat-stays, and I’ve had an aluminum road bike. I’ve ridden steel road bikes and mountain bikes, but this is my first carbon road bike. I came into this bike expecting it to feel like I was riding on a cloud, or being carried down the street by a loyal gang of servants while I sat on a plush, velvety seat woven from angel hairs. That’s not what it felt like. What I got was a bike ride, but it’s way better than anything I’ve ever had

My carbon ‘cross bike was nice. It was comfy; it was relatively fast, but ‘cross bikes and road bikes ride differently. It doesn’t matter what they’re made out of.

My Kampionne has been ridden in crits, power tests, road races and Thursday night world championships. It’s done well in all of them. It would probably ride better in these events if it had a better engine (that’s me!), but it seems to be doing well with what it was given.

I’ll start with comfort. This isn’t a full suspension bike. It’s not a minivan. It’s a road bike. You know what? It’s possible for road bikes to be comfortable, or “plush”, but they’re still road bikes. I was kind of disappointed the first time I rode this bike because when I rode over cracks in the road, I still felt them. I just assumed that because it was carbon, it would completely kill road noise. Once I understood what to expect, I understood that this bike rode awesomely.

My carbon ‘cross bike felt dead on the road. It muted road noise, but it didn’t give any feedback. My aluminum road bike gave LOTS of feedback. Have you ever ridden on chip-seal roads? I felt every chip, and they weren’t sealed very well. My Kampionne quiets road noise; it doesn’t mute it, but it controls it. If I want to charge into a corner, I understand what the bike is telling me. I know when I’ve got grip, and when that grip starts to waver. But the bike is comfortable enough that I can ride on South Carolina roads that are ignored by everyone who doesn’t own a 4x4 and still be happy. This means that when I do a hotdog criterium with a 180 turn every 500 meters, I’m not limited by my bike… just by my skills. The bike turns, and turns well. It holds a line, and is ready to accelerate out of it as soon as I catch my breath. It also means that when I want to ride 4 hours, my back doesn’t hurt nearly as much as my legs. I can ride as long as I want, as comfortably as I want.Let’s be honest: you can only be so comfortable sitting on a 145 millimeter-wide piece of plastic and faux leather, but this bike doesn’t remind you that what you’re doing hurts, it embraces it. 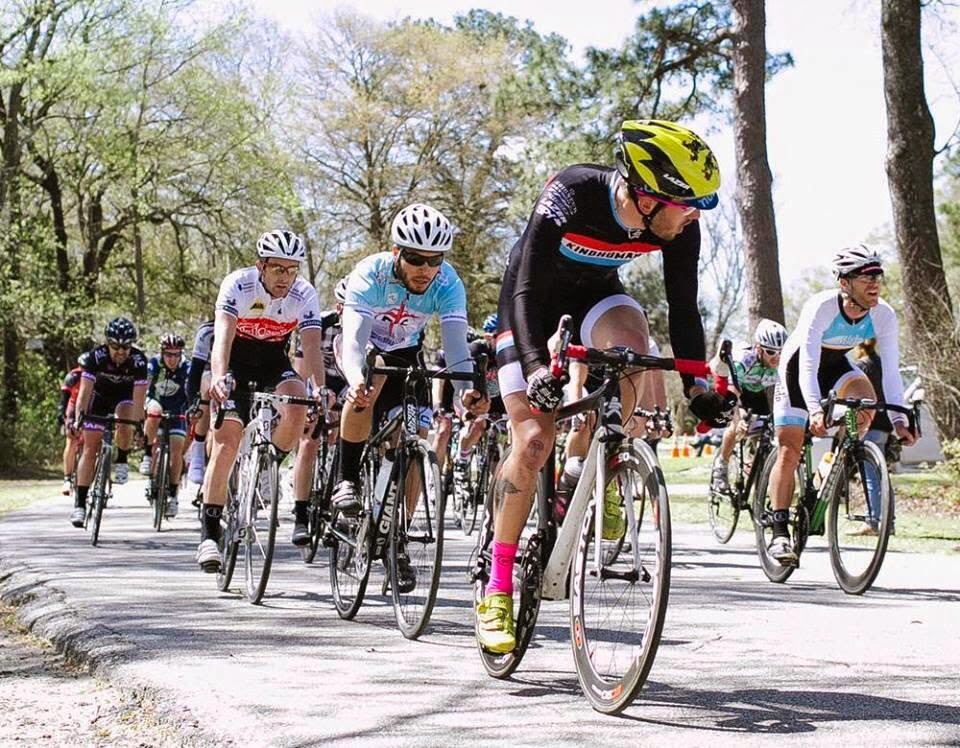 I’m not Mark Cavendish. I’m not Mark Renshaw. I’m not even the best sprinter on my group rides, but I know when a bike is stiff. I’ve ridden bikes that were noodly, but didn’t ride smoothly at all. The KindHuman Kampionne wants to go forward! Once you tell it to accelerate, it’s already 10 meters ahead of you. I’m almost positive that I could make this bike do a sick burnout if I want, but I don’t, I want every ounce of energy I put into pedalling to make me go forward. I have cheap medals to win, afterall. This bike does that- it goes forward, it turns, it even goes up. If I want to crank it up a hill, the bike is ready. It’s light enough to climb (sub-16lbs with SRAM Apex… APEX! Seriously!) but it’s stiff enough to sprint. If I want to shoot for town lines, it’s down. If I want to race it in a collegiate conference event, it’s waiting for the last lap bell… long after I’ve resigned to a pack finish.

The geometry is a little bit different than what I’m used to in a road bike. The head tube is a little bit taller (and it wishes it was a baller). This took a little bit of getting used to, but it’s paying off. Once I get finished with my brief road season, I typically switch to my ‘cross bike from June until February. I don’t like changing back and forth between the different geometries on my road bike and ‘cross bike. I’m planning to do a full summer base period on this bike though. Heck, I’ll probably ride this bike all year. I can get this bike into a position that resembles my ‘cross bike, while still getting the ride benefits of a road bike. Braking is better, obviously, and unlike a ‘cross bike with road tires, it still feels and rides like a road bike should (that’s probably because it IS a road bike). While I usually switch to my ‘cross bike to get into the same position I’ll be racing in all fall, I can ride this bike, be just as comfortable and still benefit from the lower bottom bracket when I’m in a road group or navigating 24 mph turns.

The only parts where this bike doesn’t quite live up to my last road bike is the bottom bracket, and cables. I love a threaded bottom bracket. They’re easy to install and maintain… and almost all of the cranks I have in my inventory are SRAM GXP cranksets. I don’t own a bottom bracket bearing press and don’t intend to get one anytime soon (I also own BB30 bikes, and have the same issue). When I got this frameset, I had to get my LBS to order and install a GXP converter for the BB86 bottom bracket shell. My only complaint about the internally routed cables (again, the shop ran my cables, so I haven’t dealt with the routing) is the lack of downtube barrel adjusters. Of course, this isn’t a new design, nor is it exclusive to the KindHuman Kampionne. It’s not so much of an issue on the rear derailleur but on the front, there’s no way to adjust shifting without loosening the anchor bolt or installing an in-line adjuster. I suffered from a new-cable-stretch induced panic attack while sitting on my trainer in the parking lot before a crit a few months ago. While warming up, I realized that I wasn’t getting into my big ring, and had to stop, get off and readjust the cable. I was less than stoked. If this happened in the middle of a long ride, instead of on a trainer, it would have been pretty annoying. 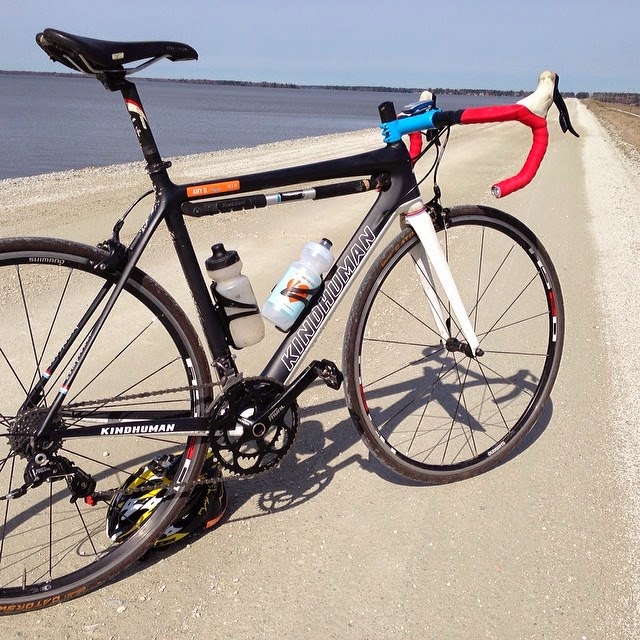 I could say something like, “it rides laterally stiff and vertically compliant” or brag about the scholarship program and how awesome it is that this bike was designed in my home town, but I’m not going to. What I’m going to tell you is that this bike does its job. It rides EXACTLY the way I want it. It’ll probably ride the way you want it to, also. Want to rail crits? Drop the stem, pedal F$#*ing hard and hope that you don’t run into a stopped moto-official. Want to climb? Skip that cookie that you’re holding, and head to Boone. Want to go ride all day? Get a decent fit, run it by your significant other and clear your schedule. You won’t have to worry about your bike, ‘cause this bike wants to do it all. It’s plush enough to ride forever, but it’s stiff enough that you can ride it in a crit and accelerate every 30 seconds over and over and over and over and over again until you’re holding your arms in the air and thanking your significant other for all the free time they gave you.


This bike can and will do it all. You’ll love riding it, and you feel good that you've contributed to youth cycling through the Take the Lead Scholarship. It’s a win/win/win. That’s a win for you, the scholarship and a race win. I promise.

Check out the Kampionne here
Posted by Justin at 10:19 AM

Email ThisBlogThis!Share to TwitterShare to FacebookShare to Pinterest
Labels: review