Saturday's ride in Savannah was just one of those days.

Within minutes of leaving the Savannah playhouse (I mean, Jen's house), I got a nice dose of harassment. Riding up behind me, laying on your horn and then stopping in the middle of the road (on a residential street) really isn't a smart idea. I resisted the urge to fling a bottle through their window, knowing that: 1) I had three hours of riding ahead of me; 2) it had my name on it. 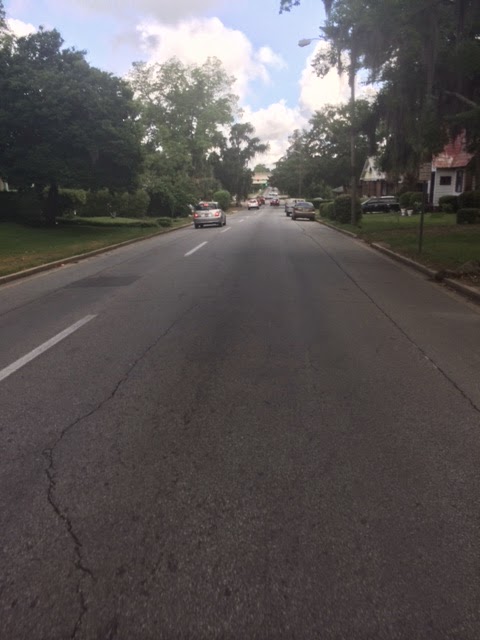 I tried to snap a picture of the car but, as usual, there isn't any useful information in it. They got stopped at a redlight, and we had a nice friendly conversation. I won't repeat that conversation here.

About an hour and a half later, more excitement. What I thought was a very large bumblebee decided to take up residence in one of my helmet vents. Rolling down a straight, flat piece of tarmac, I sat up and took my helmet off. When I did that, my earphones came out of my ears and fell into my drivetrain, getting tangled in my chain and cassette. Of course, I didn't realize that this is what happened initially. All I knew was that I had both of my hands off my bars, my helmet off my head and that my back wheel was locked and skidding across the road. 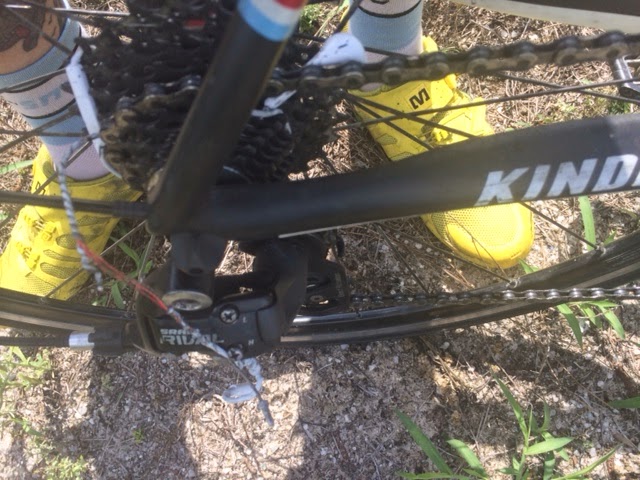 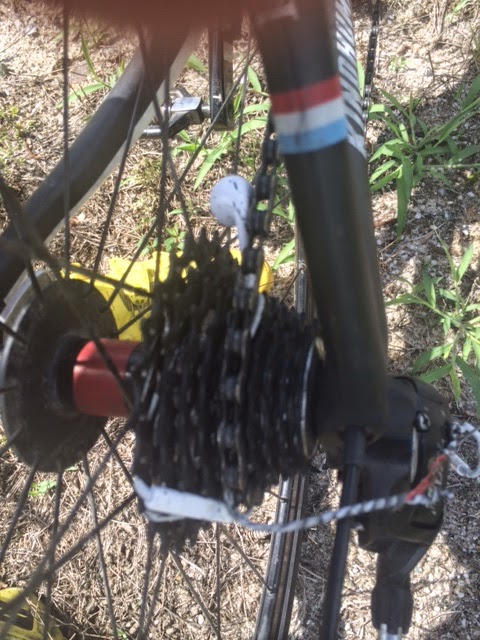 All of this took approximately .35 seconds. I got the bike stopped, realized that the giant bumblebee was actually a cicada, and set about to untangling my headphones to I could ride home. I had to use my drivers license to get the last bit of plastic out from between the cassette and hub flange so I could actually coast for the rest of the ride.

Once I was just about to get up and get moving again, pssssssss... My tube decided that being a tube was hard, and evacuated all of its air. 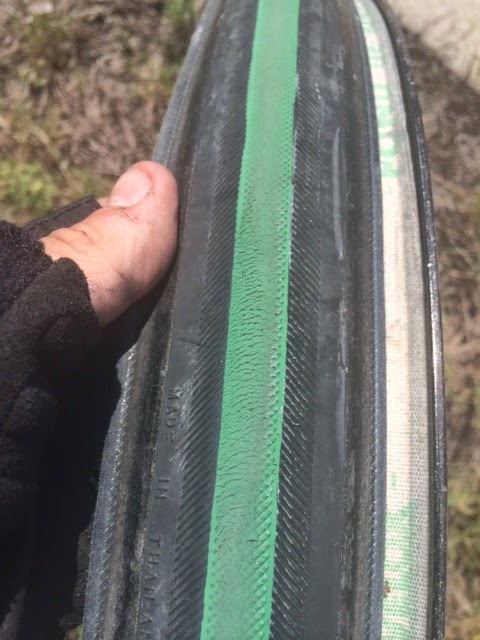 I assumed that the flat had something to do with my skid stop or that the tube just quit after sitting in the sun for 30 minutes, but I still checked the inside of the tire just to be sure. Nothing there. New tube in and I was on my way.

I guess thirty minutes later, the same tire went flat. I rolled in the grass the extra few meters to get to a gas station so I could have a Cheerwine while I changed my SECOND flat. 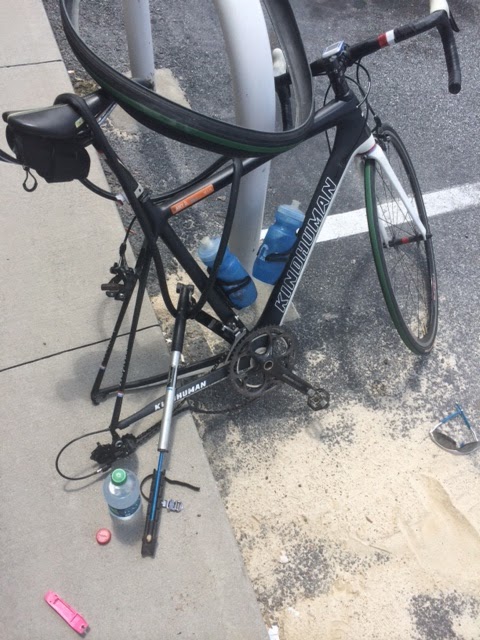 I assumed that the second flat was the result of a bad spare tube. Again, I checked the inside of the tire, taking it completely off and feeling around to be sure there was nothing sharp in there. Assumptions are stupid.

Clouds were starting to build, and Jen was texting me worried about how long I had been out. I sent her a Glympse link and asked her to be on standby in case I had another flat.

I made it home safely, went to the shop that afternoon and restocked on tubes. I went out for a ride the next day and, of course, had another flat. This time I was 4 miles from the house. Apparently my Velox tape folded back, exposing a few spoke holes, and destroying every tube and dream I had. I turned around and went home, knowing that riding bikes just wasn't in the cards today. 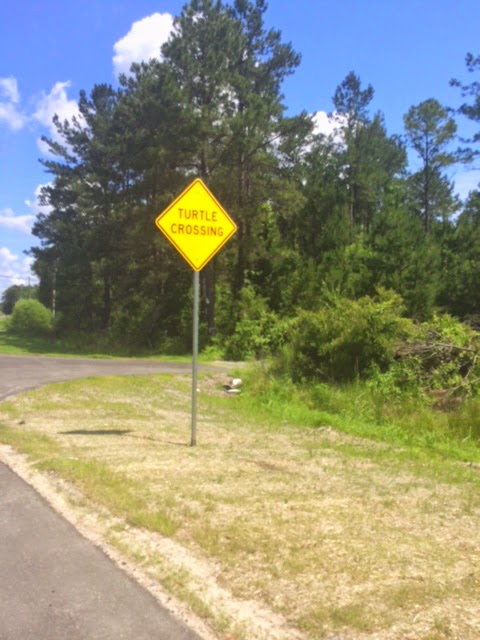 The weekend rides brought at least one smile ^^^.

The rest of the weekend was the polar opposite of those two rides. All sorts of guests were in and out of Jen's house and we took time to explore, and eat, as much of Savannah as possible. One of Jen's old classmates from SCAD and his girlfriend were down from New York and both of Jen's brothers also came to town. It was cool to hang out with the whole lot of Huling kids, and this was the first time the three of them had been together in around three years.

It also provided a wonderful opportunity of Cards Against Humanity, and a Westbrook Mexican Cake. Mexican Cake might be my favorite beer in the world, and it looks like I'll only have my hands on one bottle this year.

Everyone went their separate ways Sunday evening and Jen and I got to actually hangout without being hosts and tour guides. I realized that Sunday night would be my last night in Savannah as a guest (at least for the summer). The next time I go down there, I'll be carrying all sorts of crap and squatting for two months. Summer in Savannah begins!

Of course my tour guide gig fell through. The company's owner told me I was taking too long to get started, and accused me of costing him business, despite knowing when he offered me the position that I wouldn't be moving until after the 13th. So, this will also be the summer of ramen!


Post script: had a fourth flat on my ride tonight. This time it was a pinch flat on my cyclo-cross bike. 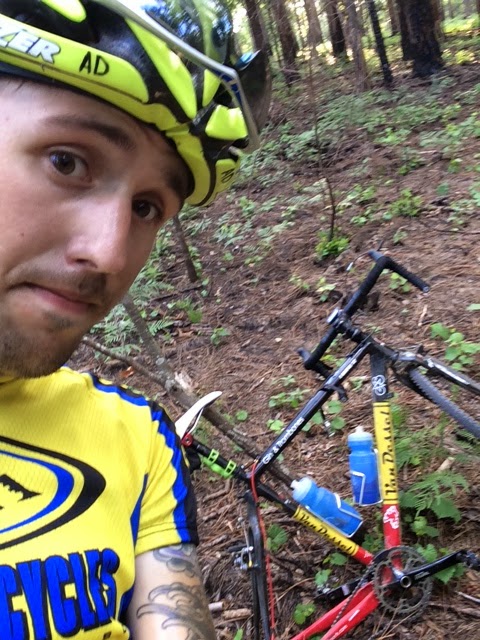